Chernobyl: How We Became What We Are Today 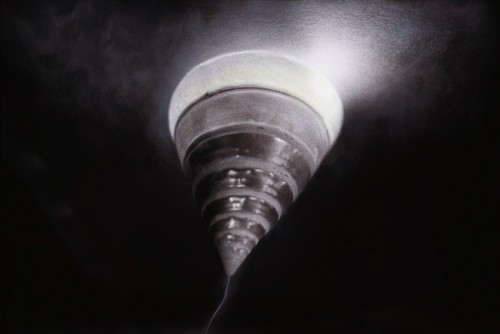 Before the first astronaut was sent into space, someone who could meet several ideological criteria had to be carefully selected to lend the enterprise a distinctive human face. Yuri Gagarin was chosen to be that man. After the explosion of the No. 4 nuclear reactor at Chornobyl (this is the Ukrainian form of the place-name) it was the countless liquidators who came to symbolize the disaster. There were a great many of them. It was no longer a single face.

Robert Musil was right to claim that a man can’t be angry at his own time without suffering some damage. The same applies to suspicion. Constant suspicion and never-ending distrust can also kill us. But suppression is not only ignorant, it can also be life-saving. Suppression happens for the sake of life, not death.  The only people who can understand this are those who live in a contaminated world from which there is no escape for them, while their entire lives are still ahead. At some point you have to say: I want to live my life come what may, without constantly thinking about the amount of contamination in the milk or in the mushrooms and without constantly recalling the direction of air flows on that day. At some point one has to say: a shorter but carefree life is preferable to a longer one, contaminated by constant doubt. For the latter is no longer a life.

Strangely enough, after all those years of suffering the stigma of ineptness, Ukrainians have found some consolation in the Japanese disaster. Since no other country had experienced a disaster of such proportions, this nation, heavily afflicted by inferiority complexes, had perceived it as further proof of its own unworthiness. But now it has happened in highly-developed Japan, regarded by many as the very epitome of technological civilization.

On the other hand, many Ukrainians have marvelled at the unwavering confidence that Japan won’t experience the worst-case scenario, if for no other reason because it’s happened in Japan and not in Ukraine. As if Japanese plutonium radiation were only half as bad as Ukraine’s.

At the same time it is as if what has been happening in Japan has given us permission to finally inch towards our own mourning and our own traumas. The suffering of others isn’t just an invitation to feel sympathy but also an acknowledgement of one’s own suffering.

It wasn’t not only, or perhaps not even primarily, what happened in Fukushima, that seems to have finally changed the perception of the Chornobyl disaster from 25 years ago in Ukraine itself. Although the events in Japan a few weeks ago and the – still uncertain – outcome of these events have, of course, highlighted the main points in the discourse in this country. We can no longer speculate how Ukraine would have experienced and marked its own anniversary if it hadn’t been for Japan. For the unimaginable has become real, depriving us of a sense of the possibilities. What remains is a pure sense of reality.

What started to change the perception was the power of the figure alone: 25 years is a round figure that allows the distance to shrink gradually rather than pushing it into the distant past, particularly in case of disasters on the scale of Chornobyl, in terms of grave social and personal trauma, irreparable environmental damage, mental and physical health risks and all other threats that Chornobyl has come to symbolize.

People generally agree that the political and environmental changes unleashed by this disaster were so profound that the only fitting term to describe them is rupture. The disaster set a final seal on the end of the Soviet Union. What had started exactly 50 years ago, on 12 April 1961 with the beginning of the space age – i.e. the post-Stalinist post-war effort to lend legitimacy to real-existing socialism through the hero worship of an ideologically conditioned and supported technological progress – came to an end almost exactly 25 years later, on 26 April 1986, in Chornobyl. What ended was not just the credibility of the communist doctrine but the faith in the unlimited controllability of all realities – not only natural but also ideological and aesthetic. Ukrainian arts scholars are largely agreed that it was Chornobyl that triggered postmodernity in all areas of Ukrainian life. That makes a lot of sense.

In terms of Ukrainian independence aspirations the disaster provided ultimate proof that the existence of the Soviet Union lacked justification. The accident unleashed forces that were soon to usher in the collapse of the empire. From this point of view it provided an impulse for the realization of a dream. The trauma was instrumental in promoting the dream, which came true five years later: in 1991 Ukraine became an independent country. In the meantime hundreds had died and thousands had fallen ill. Yet a strange silence surrounded Chornobyl. In the newly self-reliant state, nuclear energy was not widely discussed. While it was treated as just one issue among many, the development of Ukraine’s atomic industry went quietly and matter-of-factly ahead, based on purely economic considerations. As if this wasn’t the country that, only a few years earlier, had experienced the worst technological catastrophe the world had known hitherto.

However, there is an explanation. I will now try to highlight the aspects that I consider most important, from an internal Ukrainian perspective. Chornobyl became highly, libidinously charged, both as a symbol and as political rupture. Naturally, this left little room for mourning and examination. It was a guarantee, evidence of the inadequacy of a previous life. It was also an excuse, even for those who had previously not championed independence: for now everyone knew why we had to start a fresh, our very own chapter, immune from disasters caused by others. A new beginning instead of an end. It was a foreign disaster as long as Ukraine was part of the Soviet Union. With our own country it became our own. And that was much harder to take.

Besides, the outside world associated the young country virtually exclusively with Chornobyl. This association was too restrictive. It narrowed everything down to tragedy and mourning, while the Ukrainians hoped that a successful decoupling would result in a different, more enthusiastic perception by the outside world, to which we finally wanted to belong after decades of Soviet isolation. We longed for enthusiasm rather than acknowledgment. But instead came a new kind of pigeonholing: Ukraine? Where on earth is it? Give me a clue, ah, it’s the Chornobyl country! That’s it!

The problem of radioactivity was not exactly mitigated by the fact that in the following years the world came to perceive Ukraine in a different light than it hoped for, due to a variety of things ending in -tion and ity: corruption, prostitution, migration, criminality, brutality. Instead, radioactivity and sovereignty came dangerously close to each other.

And the more powerless the country became the more effort went into creating a moronic martyr myth. Using a repellent official rhetoric and organized activities the authorities tried not only to cover up their own impotence and corruption, but also to establish something of a foundation myth. It wasn’t only state officials who participated in these efforts; artists and poets also played a part. An incredibly false Chornobyl discourse developed, which was also cultivated in school curricula. Not surprisingly, it has been denounced by many of those who felt this approach has contaminated the theme itself. (Incidentally, something similar has happened as part of the holodomor discourse of the 1932/1933 famine.) In addition, aid for the victims has often been misused in the most outrageous ways: funds were misappropriated or reached the wrong people while those really in need received nothing.

The exhilaration of the first years after independence has long dissipated, but life and love are not compatible with constant remembrance of a tragedy. If life is to go on, forgetting is in order –

even if it means suppressing memories. Two things that are quite characteristic of many Ukrainians – trivialization of Chornobyl and a constant worry about one’s own health – are only seemingly incompatible. Probably for the first time since that fateful day, 26 April 1986, there are indications that this year’s commemoration of the Chornobyl disaster might turn out to be different. An unprecedented variety of events and publications are being planned. It is to be hoped that this new wave of insight does not subside so fast. Acknowledging traumas, particularly social ones, takes a great amount of time. Integrating traumas takes even longer. The question is whether we will emerge stronger and more insightful in the end.

The original article appeared in German in Frankfurter Allgemeine Zeitung.