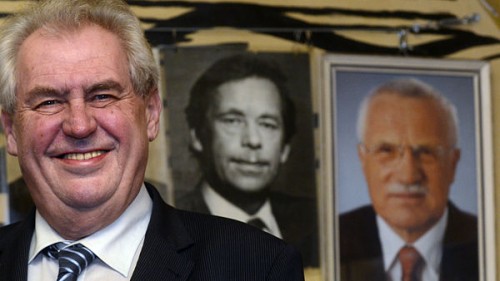 In expressing the ambition to be the voice of the bottom ten million of the unprivileged in his inaugural speech, Miloš Zeman has provided a classic demonstration of an artificial split sought by all politicians of a populist bent, who like to divide society into the virtuous, uncorrupted pure people on the one hand and the corrupt elites on the other. The latter have been variously described as dinosaurs ([journalist and current Chairman of the Czech party Public Affairs Party] Radek John), thieves (Igor Matovič, Chairman of Ordinary People, a Slovak political party), or a discredited political caste (Beppe Grillo, the surprise of the recent Italian election). But rather than his political triads (three goals, three axes of evil and the three things he asked for in a prayer) it was Zeman’s tour of “islands of positive and negative deviation” that has caused the greatest stir.

The Czech public seems to take it for granted that it was Zeman who – in his capacity as prognostician – coined the term islands of positive deviation well before the Velvet Revolution. However, this is not really the case: in the 1980s the concept was shared by a section of Czechoslovakia’s semi-official social science community. It was particularly popular among Slovak sociologists. In their view, positive deviants represented the opposite of shadow individuals, a widespread social type in the era of “normalisation”; that is to say, people who no longer believed the regime could be reformed and thus adapted their life strategies to the prevailing circumstances. Positive deviants, on the other hand, tried not to succumb to defeatism and fight back. For example, in his sociological analysis of social misery Vladimír Krivý cited islands of positive deviation as a promising sign of desirable change. Zora Bútorová, Ivan Dianiška, Pavol Frič, Fedor Gál and others applied this optics to their predictions of the future development of Slovak scholarship in their account of various centres of positive deviation within the scholarly community. The author of this piece wrote about environmentalist movements as a breeding ground of positive deviation, producing unique personalities in an era of proliferating non-personalities. Representatives of various professions from the alternative art scene, musicians, visual artists, writers, theatre people as well as young Christians, educationalists and psychotherapists all identified with the label of positive deviants, as did those journalists who fought to expand the space for free expression.

One of the reasons why this term caught on was that it offered a meaningful reading of the situations in which individuals found themselves. Anything that the world outside of the islands of positive deviation – particularly the official structures – labelled as unrealistic or extremist would appear as remarkable, desirable and worth following if viewed through this lens. The term thus helped to remove the spell of stigmatisation. In those days it was pointless to analyse the opposite of positive deviation since the entire undemocratic political system epitomized negative deviation, in the sense that everyday behaviour had become a deviation from moral standards. Soňa Szomolányiová underscored the role positive deviants played in breaking through the vicious cycle of normative schizophrenia, presciently recognizing in them the germ of future so-called small quantities capable of effecting positive social change. And lo and behold: in November 1989 all these currents flowed together to create a broad civic movement.

In the summer of 1989 Miloš Zeman cited the islands of deviation in his article Prognostics and restructuring. In those days he was a positive deviant himself. Later on he addressed the Civic Forum (CF) meetings and helped prepare the CF election programme jointly with other members of Josef Vavroušek’s and Daniel Kroupa’s team. Having been in charge of the election programme of Slovakia’s Public Against Violence – a movement that worked closely together with the CF – I remember Miloš Zeman as a different man from the Miloš Zeman who came later. Quite different from Zeman the prime minister of the so-called opposition agreement and unresolved scandals fame. Very different from the present-day Zeman, whose campaign was marred by dangerous nationalism, and different from a President who declared war on the media.

These days the head of the Czech state perceives positive deviation as islands of outstanding performance, represented by entrepreneurs á la Tomáš Bača, mayors who bring prosperity to their communities, a kind of latter-day heroes of capitalist labour. While their contribution is undoubtedly valid, they represent a social type quite different from that of the positive deviants in the days when it required not only a greater effort but also greater courage and moral integrity. Which is exactly what characterizes at least some inhabitants of his islands of alleged negative deviation. While it is true that the Czech media are not exactly a model of professionalism or lack of bias, and while some are prone to a tabloid style, nevertheless it is precisely the handful of decent media and journalists who help make the air in the country breathable. Without their contribution we would know much less about some real negative deviations. Without them nothing would stop Zeman’s Godfather mafias, while the courts, the police, and the entire political class would not feel under real pressure.

Following in Václav Klaus’s footsteps, Miloš Zeman had a chance to let some welcome pro-European fresh air into Czech foreign policy, acting as a counterweight to Czech reserve or Euro-scepticism, whatever its origins. However, none of this featured in his inaugural speech. What he did include, alas, places him in the spot he has allocated to others. As European Commission Chairman José Manuel Barroso said recently, within the EU freedom of the media is a sacred principle, let there be no doubt about that. If this principle is currently a generally recognized European standard, by declaring war against a substantial part of the Czech media on taking office the President of the Czech Republic represents a deviation. And certainly not a positive one.