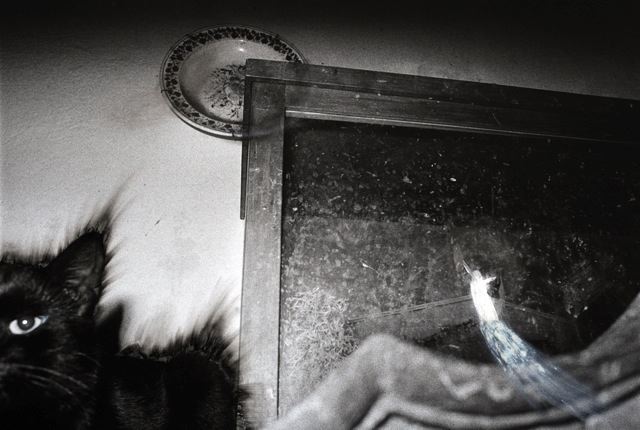 Are you illiterate or what? he recently asked his citizens, addressing us all but especially those of us who hadn’t voted for him. His question was directed at a journalist who had inquired why he hadn’t appointed the Procurator General elected by parliament. Well, with a question like that, she was clearly asking for it! It’s quite obvious why he hadn’t signed the appointment: because he doesn’t have to. Nobody can force him to carry out his constitutional duty or follow the Constitutional Court’s decision. He slapped the citizens in the face with an arrogant counter-question, a nice slap from a position of power. This is how Slovak political power speaks to us: by slapping and spitting. And I’m suddenly afraid of keeping silent about this even though I know there’s no point talking about it given the deluge of words that comes rushing at us from all sides, individual words pathetically drowned by the noise of insignificance, turning into nothing but props, sound effects floating around like wine midges (mind you, those at least herald the presence of wine). I am afraid to keep silent and that is why I’m speaking out; perhaps I’m wrong to speak out but by staying silent about this President I would have to join the silent majority and keep silent about everyone and everything. May I speak? These days the people who spit in our faces want to decide what we may and may not speak about. They have plenty of experience with decisions like these – after all, they did so over twenty years ago and now believe themselves to be predestined to do so.

I’m lying back observing my young girlfriend. She’s not interested in the President; he might as well not exist as far as she’s concerned. But she is scared of bees. The bees know it and love to seek her out everywhere, and last summer they found her in this flat. Once she mistook a dangerous hornet for a harmless insect, commenting on this sweet little bug flying around the place. My girlfriend is delicate and sensitive and her fear of bees scares me because one kind of fear immediately makes me think of another. This time it has made me think of those of my fellow-countrymen who agree with Wittgenstein that Whereof one cannot speak, thereof one must be silent. They have been quick to realize that unless they want to get into trouble, it’s best not to speak out. The ruling party’s constituents keep silent too, but theirs is a gleeful silence, they are pleased to have stolen a march on everyone else. But they also keep silent to be on the safe side, just in case, since they know that those who are in power now won’t be in power forever. Never mind that the degrading, undignified fear is here to stay. Those who support the current powers-that-be hide their political opinions, keeping in mind that one day they might need to join the other side. The silent majority makes itself heard only to demand more money and blackmail. First it’s the doctors, for whom the bribes are no longer enough – with due respect to any exceptions to this rule; next it’s the teachers, the nation’s elite, who have no qualms about regurgitating old communist guff in literature lessons – with due respect to any exceptions; the financially undernourished state bureaucrats would like to be next but are too well trained in non-committal silence, in fact, they’re the very essence of non-commitment, which is why the powers-that-be have nothing to fear from them, especially since they’re in cahoots with each other.

We are doing our best to separate the wheat from the chuff.

Except it’s been a long time since I’ve seen any wheat, I reflect in bed, observing my girlfriend as she prepares a soy drink in the kitchen and pours it over her cereal. I can’t stand healthy food, especially for breakfast, but I keep silent. I have learned my lesson. It’s not particularly hard – after all, silence has a tradition going back hundreds of years and is golden. Yes, the transformation of silence into gold: why didn’t the alchemists think of that instead of wasting their time with lead? And talking about wasting time: people who are silent will never be wasted. They are fit for production, capable of taking on administrative tasks and they acquit themselves particularly well when it comes to legitimizing whoever happens to be in power. Night after night they undergo a mythical transmutation into crowds bawling at football stadiums and muttering in pubs. Because in this country people shut up only when one really must speak out.

So wouldn’t it be better to live somewhere else?

Let’s face it: are we capable of living really differently somewhere else?

This column appeared in the Czech monthly Host 1/2013.