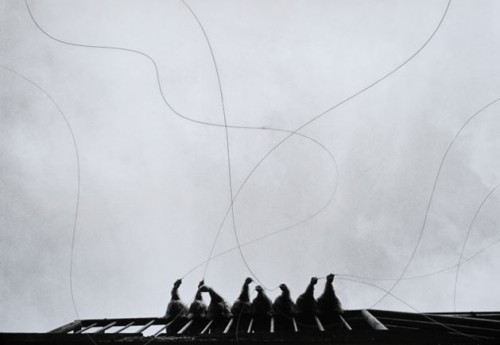 When I’m asked where I feel I belong, in Hungary where I was born, in Switzerland where I grew up, or in Italy where I live, I answer: in all three countries, to varying degrees and intensity. If I can see that such distinctions may tax the enquirer’s patience, I simply say: in Europe. But to be honest, I really don’t know what that means, unless we’re talking about biographical facts: that I was born in Europe as a European woman to European parents. Or that I find Europe by and large familiar, that I’d probably be able to move around in Oslo (where I’ve never been) with some degree of assuredness if only because I’d have brought along with me certain conceptions of what a European city looks like. I would decode Oslo in terms of these conceptions; that is to say, direct my gaze at what I already know. So what do I know? I know historic city centres, more or less gutted in the interests of commerce, encircled by a more or less ugly modern urban belt. I don’t mean Oslo specifically because I don’t know the city. I’m talking about the typical image of the European cityscape which I’m carrying around with me like most of us probably do – although I must add, I don’t live in a city which corresponds to this image. Rome’s city centre is not hollowed out but well-inhabited. The transition zones to the periphery are spacious and smooth. Rome is an exception so I’m reminded of the ubiquitous scheme of things only when I amble through the shop-snarled pedestrian zones of other European cities. And don’t feel I belong there.

I recognise the image: it’s familiar but still irritating. The irritating element is what’s behind the facades. Brutal business, indiscriminately seizing whatever can be sold. No doubt, that’s what the world is like today but we Europeans have been teaching the world to become so ever since our robber-barons started making other countries insecure. We’re making ourselves insecure. We are never sure what values our aesthetic and intellectual achievements represent, we’re never sure if we must at times sacrifice them to prevailing circumstances. Circumstances created by us, let it be said, to which we need to sacrifice nothing if we did not want to. But we don’t know what we want. We’re not even clear about including the right to the pursuit of happiness in our constitutions. This is not just about discussions on how, why and which funds should be allocated, but about the very idea of happiness, on which our very own Meister Eckhart had other views than, say, a Wall Street broker, but nevertheless the right as it stands in the preamble of the American Declaration of Independence, in all its humanist and realistic straightforwardness, is an orientation of sorts.

We lack orientation or rather have too much of it, which leads to general dithering. We even dither as consumers – the commercialised city centre dithers in agitated concern over its historic elements and we wring our hands. It comes as no surprise that we are not even able to full-heartedly wish for our finest achievements although they are actually enshrined in our constitutions: democracy, the multi-party system, separation of politics and jurisprudence, freedom of opinion, freedom of the press, to name the most important. Certainly, we do want all of that, never mind that the we is subject to restrictions, but we don’t have the energy to implement them all over Europe.

Those who want to (and these are the people who really have the will) take advantage of our lethargy to roll back things to before the era of Enlightenment, to a situation which is etched deeper into our European DNA than human rights – to despotism, oppression and legal uncertainty. So it is not simply bad luck for the citizens of a country when their situation degenerates, but a manifestation of our European misfortune.

I’m not just asked where I come from but increasingly also how I feel about the country of my birth. Bad, is all I can say. I live abroad, I don’t see things from up close but my bad feeling is real and stems from the fact that the degenerating situation appears only too European. So go away from Europe? Of course not.

Resistance is better even though it is limited to a few individual gestures. But at least my Europe is still rich in things that I subscribe to: to people who do not lose sight of our inalienable rights, to friends, to places, to woodsmoke on an autumn day above Palombara, a village near Rome, to the melody of Swiss dialects which still use words like gumpe and obsi, to the mood on Margaret Island in winter which Krúdy describes with these words: The white branches of the trees turned dark blue, in the grey light crows flew in a long black flock towards a large elm. (A fák fehér gallyai sötétkékek lettek, és a varjak hosszú fekete seregben mentek a szürke levegőégben egy nagy szilfa felé.)

The text appeared in a special supplement to Élet és Irodalom, part of discussions on the Europe project held in Budapest.