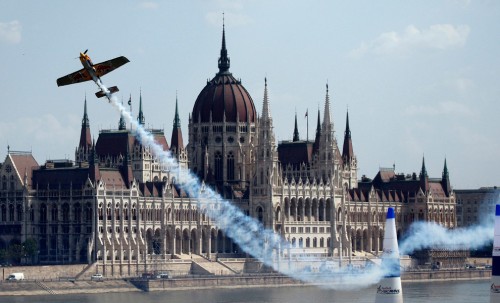 Forty years ago I celebrated my thirtieth birthday in San Diego together with Herbert Marcuse and Reinhard Lettau. The birthday dinner was not very appetizing, red sausages and mashed potatoes, which were served to us in a restaurant called Der Wiener Schnitzel. An elderly man was sitting at one of the tables, all alone, who was also picking at his food. Lettau said that he was a Hungarian who had fallen ill because of his homesickness. A homesick Hungarian writer, whose lines had never been read by anybody, sitting in a depressing fast-food restaurant in San Diego – this was an image I could not get out of my mind any more. The man was Sándor Márai, whose diaries became one of my preferred things to read many years after his death.

I was born in 1943 on a freezing cold December day in a tiny village in East Germany. As I learnt later on, close by there was a camp, which was used as a sub-camp of the concentration camp Buchenwald. My grandmother told me once that she had watched the emaciated people working on the fields. One of them could have been Imre Kertész who was interned in this sub-camp exactly during that year. Did he see me, peacefully sleeping in my cradle, during the last year of the war? I met Imre later in life when I lived in a house on lake Starnberg in Southern Germany with Tankred Dorst and Ursula Ehler. Occasionally, the Dorsts received a visit from their Hungarian translator, Imre Kertész, a friendly gentlemen, with whom I talked about Nietzsche’s style, because Imre was at the time translating Nietzsche. He was an extremely good storyteller and not a particularly good swimmer. Once, he handed me one of his books in Hungarian, but was so unobtrusive about it that there was no way I was to know that such a fantastic author had written this inconspicuous book. His courtesy was overwhelming. Of course we talked about my Hungarian friend Miklós Mészöly, whose books I was in charge of at our publishing house. Miklós was the role model for the younger generation. He was the only Hungarian writer who was able to travel frequently because his books had been translated and published in Western Europe. He admired Kafka and Camus, but did not think much of Lukács, whom we held in high regard.

At the time I had the impression that all Hungarians speak German more or less perfectly. This was also true for my friend Laszlo Glozer, the art critic who wrote articles in the opinion column of the daily newspaper Süddeutschen Zeitung about post-war modernism. This also applied to Péter Nádas, who at the time visited his friend Hans-Jürgen Fröhlich in Munich with whom I shared a flat. This apartment was only five minutes away from the Munich theatre, the Münchner Kammerspiele, where George Tabori worked as a producer, who was a longstanding close friend of mine. At the time I was appointed to be a member of the jury of the Berlin artists programme of the German Academic Exchange Service (DAAD) where one of my main tasks was to invite Hungarian writers to Berlin: Péter Nádas, Peter Esterházy, Lászlo Földény, Laszlo Krazsnahorkai, Istvan Eörsi and many others. It is one of the ironies of history that their fame started spreading to the entire world from Germany.

In a nutshell, I was surrounded by Hungarian writers: all of them had a perfect command of the German language, all of them were very knowledgeable regarding German literature, all of them were extremely kind and generous and had a real talent for friendships. Then there was the philosopher Béla Bácso, an exponent of Schleiermacher’s and Gadamer’s theories, who tried to explain to me in long lectures the importance of hermeneutics for the Hungarian contemporary intellectual life. And last but not least, there was the wonderful Péter Lengyel, whose novel Cobblestone was unfortunately never translated into German, or the laconic poet György Pétri, who has written the funniest and the saddest poems about marriage.

When the Iron Curtain fell, these writers, who had always been thinking like Europeans, quite naturally became a part of our joint literature. This is probably why we have become so very attached to them, because most of them and not only the Jews amongst them, had to experience certain things which are part of the painful foundation of a common Europe. Experiences which my generation, which was born after the end of the war and who grew up in a long period of peace, has not had to make.

I don’t mind if it sounds emotional if I say that the moments when I can be together with our Hungarian friends are among the happiest moments of my life. Although the current Hungarian government has been doing a lot to destroy the pillars of liberal democracy, I don’t want to be talked out of this feeling of happiness. I still remember vividly the narrations of Istvan Eörsi and György Dalos, the warnings of György Konrad and the light and melancholic escapades of the great poet and translator Dezső Tandori: It would be such a shame if this big group of German and Hungarian writers which evolved after the war and in particular after 1989, which was composed of people who enjoyed having controversial discussions but who were always very polite, were to dissolve again as a result of political realities.

This must not happen.

The text appeared in a special supplement to Élet és Irodalom, part of discussions on the Europe project held in Budapest.