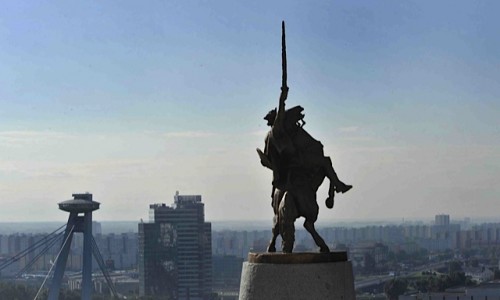 To talk, let alone write, about genitalia, and, particularly those of horses, is a rather tricky undertaking but since what I have in mind are matters of national – indeed: international – import, as well as matters of literature, I have perpetrated this text in the hope of offending neither human nor equine feelings.

2008, if I remember right, saw the collapse of a highly influential Polish literary magazine. It was called Studium. This journal occupies a place particularly close to the heart of the writer of these lines. It is exactly ten years since I made my literary debut on its pages, with a short story that later grew into a novel. Studium quite often focused on specific themes. One of its issues was dedicated to new literature from Slovakia. Thanks to this volume I made the first, albeit only rudimentary, acquaintance with the works of writers and poets inhabiting the other side of the Tatra Mountains. And since, for the next couple of months, I am resident in Bratislava, I felt this was the right time and place, evoking the right kind of associations to clarify certain things or put them into context. The above-mentioned volume included an extract from a story by Balla. Balla, dear Reader, is the newly-minted laureate of Slovakia’s equivalent of the Nike literary award. I might be getting this wrong, as I haven’t got the issue of Studium with me and the sentence I’m going to quote from memory might have been written by another author, but it went approximately as follows: The end of the world is nigh, for this year’s cherries are the size of horses’ balls!

It turns out that in Slovakia the issue of horses’ balls is not just the stuff of literature. Horses’ balls are also the theme and object of exultation by sculptors, and the subject of fierce discussions among politicians and their electorate. Studium was published in Kraków, a city that in the 9th century was incorporated into the Great Moravian Empire. A couple of weird fellows from the south who had turned up there found a way of enticing the empire’s ruler to adopting Christianity in a version far removed from the one Poland’s King Mieszko later tried to adopt. The boss of Greater Moravia was Prince Svätopluk I, and since Slovakia was an integral part of his state some historians as well as new politicians regard him as the first and only king of Slovakia. The fact is that Svätopluk accepted the patronage of the Holy See and that some Latin documents refer to him as rex, i.e. king, although the rest is most likely to be just wishful thinking on the part of experts in historical prosthetics. What matters is not whether he really was a king. If a nation so wishes, it can proclaim as king and patron whomever it chooses, even Jesus Christ, the son of our God, our Lord conceived from the Holy Spirit. Certain factions in Poland have been working on this for years and I might live to see the day when Poland will have a complete set of patrons. The Queen of Poland was installed a long time ago and is doing fine, thank you very much.

Bratislava is dominated by the silhouette of a magnificent castle. The newly restored and whitewashed block is the clearest indication that it is a place of weighty decision-making – the seat of the Slovak parliament is adjacent to the castle. I remember the castle from the old communist days, when it was the colour of dirty sand. Even being pictured on the banknotes of Czechoslovak korunas didn’t lend it much splendour. In those olden days there was no statue outside the castle. Now a statue of Svätopluk the Great stands there. We all need myths. A favourable political aura helps myths multiply. The king is mounted on a horse. Nothing strange about that. Most mythical monarchs are depicted thus. This steed, however, has been endowed with testicles that destroy the entire harmony of the sculpture. But I might be wrong. Perhaps the artist just wanted to have a laugh? Perhaps he just wanted to say, allegorically speaking, that although we’re a small people, we’ve got big balls? It is well known that people who have balls are resolute, energetic and confident. Maybe the author wished to confer these qualities on the entire nation? There is also another option. Perhaps the sculptor had read the story I mentioned earlier? I don’t know… In June I saw cherries on a market stall in Bratislava. As big as horses’ balls, one might say. But the thought that the end of the world was nigh never crossed my mind.