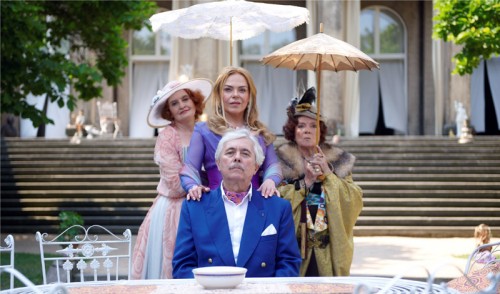 In Leaving – much ridiculed and torn to pieces before it even opened, by people who had not seen it – Václav Havel certainly breaks taboos, mercilessly lashing out at politics and politicians, ruthlessly mocking and generally exposing the political mechanisms of power in a painful and brutal satire the like of which has not been seen before.

His satirical vaudeville, whose plot is quite familiar from his theatre productions, is supported by outstanding acting, a fact acknowledged both by the film’s critics as well as those who respond with aggressive doggedness to the mere utterance of the demiurge’s name.

But why this response? It’s quite all right for some people not to like a film, but why so much moroseness and hatred.  I guess the last time a work of art was attacked so viciously was in the Fauvist period, or perhaps in exhibitions of degenerate art. For goodness’ sake, nobody is forced to go and see the film!

All this fuss surrounding Leaving is a mistake, for it is quite clearly a film aimed at informed Havelian viewers, people with a sense of humour and capable of self-examination and, above all, self-irony.

You come to laugh at jokes and gags familiar from Havel’s other plays, at pointless rituals, whose fastidiousness turns them into something quite sinister. For by dint of constant repetition Havel slowly turns little details, such as beer served with cinnamon, into utterly empty clichés and before you know it, people controlled by diluted words turn into clowns whom the clichés transform into marionettes that are controlled yet tyrannical at the same time. Of course, these are all familiar Havel devices. But this cruel film does not point its finger only at politicians; oh no, this time, to the great chagrin of hardened decadents it is also the girlfriends, the charming mistresses and adorable daughters who are turned into monsters.

This is Havel the playwright at his most audacious, smashing respectability into atoms, poking outrageous fun at the rulers and the act of ruling, while at the same time abandoning his lonely hero in a desperate place, only to make himself the butt of the cruellest joke, bursting onto the screen in a ritual bath in a pond. And although the joke’s primary target is Havel the statesman, the joke may also be at the expense of Havel the man, lover, friend, and so on.

This is no theatre of the absurd! We live in a world full of crazy twists and turns. It is enough to leave the cinema and remember that our current ruler is an expert on everything, who rubs his hands together while perusing lists of enemies comparable with those compiled by the communist secret police; or that it is possible to have a minister of culture incapable of putting together a coherent sentence, spewing hatred instead; or that a gentleman in high position claims not to originate from apes but presumably from extraterrestrials. Gosh! Wherever you look in the Czech lands you will find plenty of similar material for further vaudevilles.

So where is it headed, this stagecoach carrying the hero discarded by history, where are all these characters headed, shuffling along walls smeared with anti-Havel graffiti? Well, of course: they’re going next-door to the Ragulins [of Chekhov’s The Cherry Orchard], that’s where we may still be welcome, we’re slowly moving towards Russia, my friends, we’re headed eastward.  The vision of this playwright and filmmaker is actually quite acute. Enough of Havel already? Definitely not!