Unsuitable Time for a Meeting 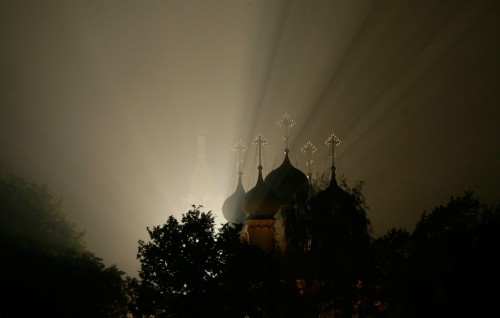 Briefly: President Obama’s administration delayed the release of the Magnitsky list for a year. When it could no longer hold back, it published the list in its most toothless form, expunging the names of any official it felt might provoke the Kremlin, leaving only assorted Dukuzovs and Karpovs who – Obama’s naive pacifists assumed – would be of no interest to Putin.

Anticipating a reward and content with his compromise, President Obama then dispatched his Advisor on National Security, Tom Donilon, to Moscow.

Ha! Dream on! Instead of appreciating the Americans’ humble humiliation, the Kremlin raised a hullabaloo of the kind a thug who has caught the scent of an indecisive dimwit might raise. Just you wait! We’ll show you! Why, this is interference in internal affairs! Donilon’s visit has come at an unsuitable time, a high-level meeting won’t take place, but Putin might, perhaps, pop in for a moment.

And indeed, the meeting didn’t take place. Putin popped in for a moment, while Donilon, who arrived bearing a personal message from Barack Obama, got to talk to the Deputy Minister of Foreign Affairs, no less.

There are few things in everyday life more irritating than agreeing to maximum concessions to a scoundrel, and then being treated discourteously in response and getting hit with a bunch of grapes in the face. Ordinary human instinct would suggest that the Kremlin would be punished for this response and that the list would be extended after two to six months.

As a matter of fact, the Kremlin has no reason to worry. President Obama’s entire foreign policy can be summed up as the attempt of a decent person to apologize to a drunken thug who has deliberately stepped on his toes on a tram to raise his self-esteem, knowing full well that the decent fellow, even though he might be stronger, will never punch him in the face.

In 2009 President Obama apologized to Muslims but this has curiously failed to disarm al-Qaida. Last year, after the assault on the American Embassy in Cairo, Secretary of State Clinton expressed regret about the circulation of a film that offended religious feelings, and when the American Ambassador in Benghazi was murdered in a carefully planned terrorist attack, Obama’s administration declared it a spontaneous attack by the very same citizens whose finest religious feelings had been offended. One would have thought this would teach them a lesson but then, in the immediate aftermath of the Boston bombing, the kindly President Obama wouldn’t even utter the words terrorist attack.

The ingratiating attitude to the Kremlin seems insignificant against this backdrop. Decent people simply cannot understand that fanatics and thugs are incapable of compromise and that they perceive any compromise as an invitation to a fresh assault. Particularly since Russia is not a major international player and does not constitute the number one problem for the US.

President Obama will always think that if he does a peek-a-boo to Putin, the latter will, in turn, support him on Iran, because that is what Obama would do in Putin’s place. And whenever, in response to his peek-a-boo, Obama’s advisor bearing his personal letter is directed to the Deputy Minister of Foreign Affairs, the US President will think that the best course of action is doing a much louder peek-a-boo to these good folks.

Then again, this is not something specific to President Obama, it’s specific to democracy. Chamberlain and Daladier behaved in exactly the same way in Munich.

So what follows from all this, you might ask? Well, nothing at all really.

Putin’s problem does not consist in the fact that in the virtual war which Russia is waging against the US in order to provide Putin with a sense of his own significance, and of which most people outside Russia don’t seem to be aware – with the same virtual wars, driven by the same psychological motives, being waged by Sudan, Bolivia and Zimbabwe and many other countries whose governments think along the lines: I’m fighting the US, ergo I’m great – is a war that Russia might lose. Oh no, the Kremlin will always win a decisive psychological victory, like that thug on the tram trampling on the foot of the decent fellow with impunity.

The problem consists in the fact that, after doing his trampling, the thug will go to a pub to have a beer and a game of dominoes, and to brag to his fellow-drinkers about how cleverly he’s outfoxed a dimwit, while the decent dimwit will go back to the office to slog away.

The problem consists in the fact that the shale gas produced in the US has already made the price of gas collapse. And in three or four years shale oil will free the US from oil imports and make the oil price collapse. But until that moment – and even afterwards – the Kremlin will have the pleasure of upbraiding the Americans and turning away Obama’s advisors who come bearing the President’s personal message.