He left the house and hasn’t been seen since 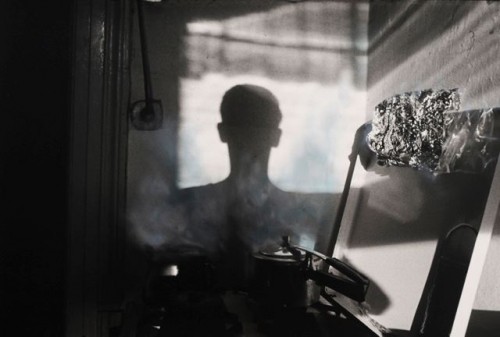 Ever since I can remember I’ve been fascinated by notices of young people gone missing, posted at railway stations and bus stops. And although the Itaka Foundation shows that people of all gender and age groups go missing, the ones that really scream out at you from the poster pillars are the young ones. Imagination goes into overdrive. If someone has left home to see a friend and hasn’t come back in years it must mean he has fallen through the cracks of reality into a realm ordinary mortals have no access to, one we can only imagine as being fitted out with lots of doors invisible to the naked eye, camouflaged by photographic wallpaper depicting everyday life, as a backdrop for the photos in the notices.

But we pass them by on our way to the tax office or to some other everyday, banal place, bills have to be paid, it’s an ordinary, grey Tuesday without a chance of sunshine or a lottery win. We are waiting on the bus stop. For a moment, like them, we are in a limbo. Slowly walking over to the notice pillar to move away from the old men smelling of fags, we see the face of this 18-year old. It is a face of someone who doesn’t know yet he will appear in a notice, the face of someone who is still on our side of reality and has no idea about the existence of the secret doors, unless of course he has an inkling of them in moments like these, moments of boredom at a bus stop. There he sits, a computer in the background, munching crisps, snatched from his lovely carefree youth. We check how long it is since he’s gone missing. It’s been six months. The face changes immediately, becoming framed in quotation marks like a travel agent’s ad for Nowhereland, an ad for reduced-price one-way tickets.

He was wearing a green windbreaker with a hood, dark blue sports pants and black Addidas shoes with three stripes on the sides. Height: 176 cm, brown eyes. Please come back, we miss you! Parents. Who is it addressing whom here? Naturally, it’s mostly parents addressing their missing children. They want to believe their children are alive, that they’ve just run away from home and now they’re here, read the notice, realize how much sorrow their disappearance has caused, and are so moved they decide to come back home. And they all live happily ever after. Another notice shows the address of a Facebook page created by school friends who are worried. They, too address their friend, using his nickname, their language. The reader is an intruder who has illegally entered a narrow, intimate communication channel between people who are close to each other.

Lately so many new notices appeared at my bus stop I began to suspect that a serial killer is at loose in Wrocław. Each search is different – some go on for months, making use of all media (billboards are fashionable these days), others are more modest in scope, yet all the texts resemble one another. What all the missing person descriptions bring to mind in their simplicity, concise and factual style, is someone speaking through tears.

Looking at the photo of the boy who stares at us from the notice as he blows out the candles on his birthday cake (eighteenth!) I wonder if wouldn’t be more appropriate to say that he’s beautiful, rather that his height is 176 cm, weight 68 kg? And the other one – that he has acne and is obviously scared of tomorrow’s physics test? And the third one – that he’s bound to have cigarettes in his room, hidden from his parents?

There’s a enigmatic secret in their eyes, visible only now, they are all marked by what is about to happen to them. They leave the house by the wrong door and end up in another dimension, a dimension as mysterious as death, to which no one has a key, except perhaps the police sometimes. But sometimes their faces betray nothing and that’s what’s really odd. How can you not be aware of anything when you’re having this kind of picture taken? Surely they are participants in a very specific photo session, a weird kind of casting? Surely this is the prelude to the moment when they are completely erased from all documents, the mobile phone stops working, there’s no activity in their bank account, and simultaneous sightings in Zgierz, Suwałki and Krynica Morska. It’s impossible not to have a premonition of something like that, that’s what we think as we mentally add some missing sign to the picture. There it is, something weird in the background, something dark descending on the head, but no, it’s just a shadow.

People have the weirdest hobbies; what one person finds attractive is as boring as hell to someone else. People go train spotting, bird and plane spotting or collect match boxes and they get they very agitated when they talk about their hobby. I’m sure that someone else beside me must be interested in these missing person notices, tears them off and collects them, visits the Itaka website, follows their stories on the net. This chap obviously liked hiking in the mountain, it shows in the picture. The photo was taken outside a mountain chalet, his long hair in a ponytail, there’s a backpack, he’s covered twenty kilometres already. But he forgot to bring his thermo mat, didn’t have enough provisions. Most probably he’s got amnesia and now goes around on city transport. Or at least that is his parents’ wishful thinking. He has somehow slipped onto the other side of discourse, where you no longer travel by buses and trams, only by means of city transport. To the side where, instead of being a handsome, cheerful young lad he are 68 kgs weight and 176 cms height. As if he were just a body rather than a living person.

Yes, it’s Mr Cogito carefully smoothing down the missing person notices stolen from bus stops. The oldest ones are a bit yellowed and faded, the transparent plastic folders in which the parents enclosed the A4 sheet to protect it from rain, are getting crinkly and matte. I guess the missing persons theme is too literary to inspire good literature. The notices we read on poster pillars mainly speak to us about our everyday lives.