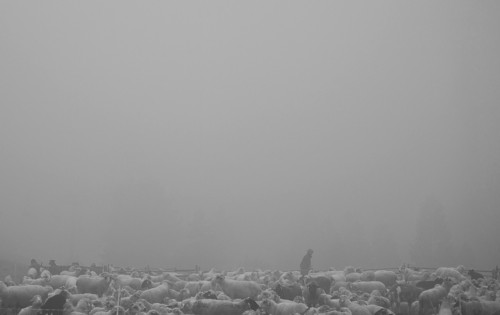 Sienkiewicz’s Teutonic Knights spoke the Goral dialect. The writer apparently shared the perception of his contemporaries of the Gorals as the ethnically purest Poles, their dialect and culture having preserved a kind of intact ur-Polishness. Nobody really cared that they are partially descended from nomadic shepherds from the Balkans, from the Carpathian mountains of Romania. It is quite possible that this fact was not widely known at the time. Not least not among the Gorals. All their exotic sounding words are more likely to be derived from the Romanian, or perhaps even Italian, but nobody would admit that. Just try telling a Goral that he’s Romanian.

The Gorals themselves – highly enterprising people who were certainly not born yesterday – immediately responded to this demand for a myth by becoming super-Gorals, super-Poles and by making themselves extra picturesque to impress city dwellers eager for powerful impressions. Impressions of both the national and the ethnographic kind. One might say that, sensing a boom, the Gorals have created a unique brand. And although they responded to an outside call, they incorporated many local elements of a sartorial, culinary and fabled nature. No other group in our country offers such a perfect mix of reality with a mythical and aesthetic project. The Gorals are a kind of fiction that has become more powerful than reality. They got their opportunity in the late 19th century and used expertly. But talent is hereditary.

It all begins many kilometres earlier. Something weird happens to the countryside. Our ruthless Poland has forced us to get accustomed to all sorts of things but somewhere between the villages of Szaflary and Biały Dunajec it is hard to resist the sense that you’re entering an even more Polish Poland, a double or triple Poland, a hardcore Poland. The degree of visual atrocity along Route 47 brings to mind a deliberate, purposely and painstakingly planned assault on the countryside, the assassination of an immense miracle we have received as a gift. In good weather one can see the mountains, a few dozen actual rocky peaks which fate or history have blessed us with so we can admire them and shelter in the shadow of their beauty. But we have to view them through an obscure spectre, through the unspeakable mess stretching along both sides of the road. This is how we imagined the big world and this is how we constructed it: out of wire, steel girders, boarding, plywood, paint, corrugated metal and plastic. And now we’re riding along some sort of abortive Valley of Jehoshaphat, our pupils bleeding from all that blarney chatter and smarmy bragging: buy flats, buy chalets, indeed robber chalets, buy sausages for 6.50, or for only 5.00, buy paintball and shitty pools, underpants, fences, salt caves, shitholes, this, that and the other, metre after metre, hoarding after hoarding, notice board after notice board, temptation after temptation, godforsaken banner after banner, as far as the eye can see, incessant bidding, an infinity of satisfaction and gratification.

And then we enter the city to which the greatest minds of an era (who have, to some extent, themselves invented the city) used to flock; park the car and head for the high street. Except that there is no high street, just a continuation of Route 47, only without cars. There is even more colourful rubbish, for everything has been squeezed and condensed and now trickles down from the walls, widows, trees, roofs, stairs, fences, from everything. Nothing is visible beneath this leprosy anymore. Beneath the chicken for 5.60, beneath music from 8 to 10 pm, beneath something else free of charge.

For talent does not disappear. Talent is inherited, adapting to the current demand. Some hundred years ago there was a demand for national identity spiced up by ethnographic exoticism. Now we want all our dreams to come true, especially for 7.50 or 9.00, because that’s how it is all over the world. We are well aware of that and have become part of this world at last, especially here, at the foot of the most beautiful mountains, in the ugliest place in the country and among its inhabitants, the most enterprising people in the world.