The Fall of Europe? 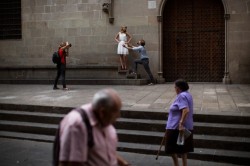 When Nicolas Sarkozy claims that Europe will explode if the euro explodes, adding that defending the euro means defending Europe, well, his claims can be taken with a pinch of salt: the French politician’s rhetoric can withstand quite a bit and so can our European ears in our increasingly baffled European heads that have lately become accustomed to quite a lot. If, however, the pragmatic and rational Angela Merkel makes an even more dramatic statement, namely: If the euro breaks up Europe will break up, it gives cause for concern even to those of us not initiated into the mysteries of financial currents and bank oracles. For up till now we have believed that Europe’s foundations were cemented with something stronger than just the currency we have all come to love so dearly. If for no other reason, then because we no longer have to run to the exchange offices at airports, calculate exchange rates and carry in our wallets banknotes with portraits of various famous historical personalities from well- established European nations and states, or walk around with assorted coins jingling in our pockets. And now, suddenly, we are told the euro is more than just money, that what we are carrying in our pockets is something fateful: To be or not to be, if you will.

It was not so long ago that we imagined we had finally reached the safe haven of cooperation, knowledge, prosperity, and tolerance, after all the ideological and nationalist trials and tribulations of the 20th century in Europe; it may not have been exactly the Promised Land but it certainly has been a grand old – and at the same time new – homeland where people are no longer at each other’s throats just because they speak different languages or because they have different views on social issues and social systems. The most recent discussion relating to the foundations of Europe, the discussion of God in the European constitution, was relatively innocent compared with the apocalyptic newspaper captions and photos we are seeing today. Such as the recent cover of Der Spiegel that shows a euro coin weighing several tons falling on top of the Acropolis as if hurled down by Zeus himself: there can be no doubt that once the coin comes crashing down everything will be reduced to rubble: this will be the end of Greece, the destruction of the Parthenon, the end of the symbol of European civilisation, the end of Europe. The foreboding of an explosion that will ensue once the euro has crashed on the top of the Acropolis will be much worse than the one that once actually took place here. As we know, after conquering Greece the Turks did not treat its culture and tradition with much respect and stored gunpowder in this holy site. The Venetians, showing an even greater lack of respect – though aware that it was a gunpowder store, they cared as little as the Turks about the fact that this was the symbolic foundation of Europe – directed their canon at the Acropolis. The year was 1687, the canon spewed fire, the European sanctuary exploded and burned for two days like a torch. Once it burned down to the ground the Venetians proceeded to plunder it shamelessly. Finally, in the early 19th century the British ambassador to the Ottoman Empire, Thomas Bruce, the 7th Earl of Elgin, tackled what was left over, taking – with the permission of the Ottoman Sultan –

the majority of the marble sculptures back to England and putting them on display at the British Museum in London. Then came the European 20th century, the century of great scientific and cultural progress but also the century in which there was hardly a city or a village left in Europe without blackened walls and spires looming above numerous ruins, a century in which not only gunpowder stores but also schools and hospitals were blown up.

In blissful serenity we looked for the magic formula of a European identity. The talk was of the Old and New Europe, of being united in diversity. The happiest were the East Europeans, having been raised in the expectation of a communist El Dorado, a mirage they saw dissolve into thin air – Paradise Lost. And so they directed their hopeful gaze toward Europe, the new heavenly land that would solve all their problems. And we also looked for the “soul of Europe”, the aspiration of Jacques Delors, one of its founders and spiritual fathers.

None of these discussions proved particularly fruitful, since the economic and liberal pragmatism that is Europe’s common denominator, is rather diffident in this respect, striving to avoid any interpretation of what Europe is or might want to be. In the modern world of disparate coexisting values and perspectives on life interpretation necessarily also means confrontation, something that nobody in this world of a free market and stock exchange mentality really needs, not even in terms of ideas. A conflict of ideas can easily develop into a political conflict and that is the last thing economic pragmatists want. Therefore we must avoid big emotions, “soul”, a deeper meaning. And thus united Europe set itself a rather simple goal: to make its economic power competitive with that of the US and the Chinese as quickly as possible, to play a strong and independent role in all global affairs. The pragmatists take it for granted that, in addition to material wellbeing, an economic boom will also produce more money for culture and more free time; and material prosperity, in its turn, will automatically engender a higher degree of tolerance on the part of Europe’s citizens. This optimistic prospect makes Jacques Delors’s project from the 1990s – to “give Europe a soul” – sound like a distant echo of an idea that has gone with the wind of soothing pragmatism. “The soul of Europe” could also be read as meaning that its citizens understand their history, culture, spirituality, the polarisation of values and ethics, the experience of dictatorship and totalitarianism, the origins and principles of democracy, the individualism of personal freedoms, as well as the striving for the common good. However, these are regarded as mere abstractions by the present-day pragmatists, who believe that human relations in a community must be governed by the same rules as those that operate in the capital markets: they should be as permissive as possible and avoid conflict as far as possible. The current economic and political pragmatism underestimates the power of ideas. It looks down on the abstractions of culture and philosophy, and especially on issues of human spirituality. It recognizes only conflicts of economic and so-called national interests and tries to resolve any conflict of ideas and, thus any latent social problem in this area, as quickly as possible by political means.

And this is precisely why we are now facing an apocalyptic vision: the collapse of the euro.
Nevertheless, we must not forget another exciting debate we have entered into in blissful tranquillity – the question whether the word “God” ought to be included in the European constitution or whether Christianity deserves an additional special mention in the preamble to the constitution. This kind of discussion is feasible only in times of peace and prosperity, when we have no other serious problems, such as the issue of Europe and eternity. There is hardly a European nation that has not deemed it necessary at some stage in their history to bring God into close relation with its own existence. Some nations have even written God into their anthem, the English for example: God Save the Queen, or the Serbs: Oh God of Justice; or all the peoples of the Habsburg monarchy: May God preserve, may God protect / Our Emperor, Our land! German battalions had blazoned God onto their war banners believing God was with them: Gott mit uns. Some believed God had particular dealings with them: God and the Croatians. Or the Slovenes: Mother – Fatherland – God. Why, we Slovenes have even included God in a proverb that describes a very particular national quality: Stand quietly, walk sideways, look down and beware of God.

The Americans trust God even more than do the Europeans and have gone as far as entrusting their money into God’s well-meaning care: In God We Trust, it says on the dollar bills. But even that didn’t help them prevent the fall of the Lehman Brothers. And the prospect of the euro falling, taking Europe down with it, has not stopped looming. With or without God on the banknotes and in the constitution.

And now we direct our slightly schizophrenic gaze toward the sky, from which the euro is about to crash down on the Acropolis, wondering what on earth is going on here. For we ordinary mortals, who have not been initiated into the stock market and the bank oracles, no longer understand anything. Financial transactions, financial markets, stock markets going up and down, rating agencies, an entire congeries of financial flows and amounts of money invisible to the human eye, have become a complete abstraction in the eyes of us ignorant people who have talked of European culture, an abstraction even Karl Marx or Slavoj Žižek would be hard pressed to explain to us today. In the old days we knew there were capital owners, i.e. capitalists, one could strike at a deal with the Krupp family but how do you make deals with abstract financial flows if an owner is nowhere in sight? There used to be talk of the expropriation of the expropriators, and the most ignorant amongst us used to read don von Horváth, who makes the businessman Schmitz, the hero of his novel “The Eternal Philistine” utter the following words: I, Rudolf Schmitz, am convinced there will not be another war between the bourgeois Great Powers of Europe because nowadays it’s considerably cheaper to exploit nations in a peaceful, mercantile manner. That’s something we could relate to somehow, whereas now we fearfully regard the writing on the wall: If the euro breaks up, Europe breaks up.

And so, all that’s left to us is to trust the old legend: Europa riding a white bull in the waves approaches Crete. We hope she does not fall off, we know she won’t, at least not into the sea. However, whatever happens on Crete will be a rather sad, though nevertheless a rather optimistic, future for Europe.

Drago Jančar’s text appeared in German www.perlentaucher.de as part of a series of presentations entitled Europe Now: A Literary Umbrella for Europe, organised by the Internationale Literaturfestival Berlin.