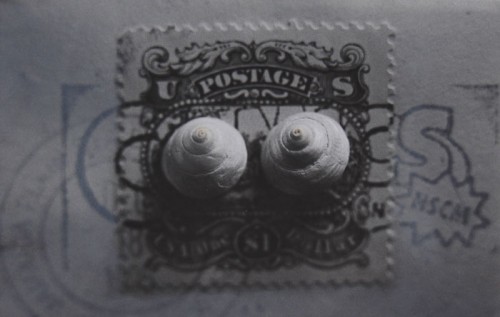 Reading books is not an innocent occupation you can indulge in with impunity. The more and the longer you read, the more you filter everything you see through everything other people have seen and said. This is most likely to occur while you’re visiting foreign parts because that’s when the eye has the greatest tendency to detect what is and to seek in it patterns of things previously learned. Jogging along the Hudson River in the evening I seem to hear the following words in my ears:

Dehnel makes me go jogging in the evenings but jogging is not for me; he jogs and runs around in circles while I walk, constantly on the lookout since every man passing by gives me a such a tender look as if he was about to pour me the best plum brandy and befriend me in a manner even more affectionate than our Slavonic way. So I pull a grimace with my mug but there are limits, my mug’s starting to hurt and not even massaging it helps. What might help is plum brandy might help but that’s impossible to get here. The thing is, Dehnel and I live in a gay district, mega-gay actually because these guys are all huge, they’re mega-gays. They all look the same, like clones: they’ve crossed the shadow line but don’t show it, each one with a shaft like a Soviet battleship and wearing a tank tops, they loiter around the neighbourhood like lice in pubes, everyone with a dog. The bigger the shaft, the smaller the dog.

A club here, a club there, and all these loitering guys everywhere – Dehnel is running, dripping with sweat, and I’m being jolted about like on a cruise on the Moldau, pulling grimaces and wondering what they do with their dogs when it comes to doing business. Do they go and visit each other with their dogs? Or perhaps they have rooms for the dogs, or employ sex-dog-nannies (surely, male ones)? Perhaps there are vacancies and there might be a job for for Herr Rudnicki? I’m tempted to ask but I can’t just come up to them and ask: What do you do with your dog when you’re having sex?, I might get my ear boxed, and I’ve had my share already, thanks very much.

Rats flash along the riverbank, a powerful stench wafts from the rubbish trucks, carrying the words of another fiction writer:

Each city has its own stench, its own typical miasma, deeply entrenched over many generations. The new and artificial smells combine with archaic aromas, known from primeval, pre-urban times. There is a clear difference between the odour of Hamburg, with its fishy muddiness blended with the sharp reek of the faux-leather jackets of Serbian gastarbeiter, and the smell of factory towns. Here in New York the black waves splashing against the rotting wooden posts carry the whiff of the port, a destination and point of arrival for all nations and nomads of the world: coal miners from Bukovina as well as Transylvanian farmers reeking of mutton suet and strands of church incense.

The stench reminded me that, unlike the perfumed big cities of Western Europe, the city used to reek, it used to be a sewer whose moral decay found its equivalent in the rotting viscera of fish and piles of manure. I stopped to inhale the odour of mud, the sea and drifting garbage. I finished the Jim Beam I’d bought with one of the banknotes comprising my 600 dollar fee, and tossed the bottle into the water. A local protested, and I just shrugged and said: Istern Yorop ay kum from. He shrugged, too, almost as if he understood.

A day later we go shopping, and this is what I hear:

I woke up feeling a great, inexplicable disquiet, maybe it’s to do with the time difference, or some kind of unexpressed, unappeased sorrow for… oh, never mind. There’s a reception tonight but meanwhile there are things to be arranged: they have exquisite woollen socks here, extremely elegant, made of good quality wool. I thought I might bring back a pair for Krzysiek Filutycki, but then again, Krzysiek has long forgotten our pre-war encounters. Our letters, those letters that were dark and gleaming at the same time, have all gone up in flames in Kredytowa Street, and perhaps it’s better that way. The city is made of glass, I keep tilting my head, it makes my neck ache all night. I’ve mentioned it to a certain millionnairess, she’s amused. She’s got used to it.

The people down below are so vulgar, America is just making its way, it’s all rough, there are constant sales everywhere, there’s constant rushing about but at the same time they are a well-built race, there’s a hint of Vikings in their shoulders, in their square jawbones, too – but sometimes there’s a light swaying, maybe an influence of the South, of Sicily, like a breeze from Agrigento, where Grzesiek and I... oh, never mind. They’re tall and wide. There are women, too. Everyone reflected in the shop windows – and only the sky is the same: in New York, above Sicily, above the steppes of Ukraine.

From the shopping it’s just a stone’s throw to the Metropolitan Museum, and there’s the next voice:

J. and I entered the room with Greek marbles and I felt as if writing poetry about it were impossible, as if I had to learn it anew: from the colour of the stone, from the shapes, from – first and foremost – the light. I am, it seems, the last poet who still understands light. Maybe Ryszard Krynicki does too, and maybe Stanisław Barańczak, but maybe not, I might be the only one. Lonely, I face the marble stele – it might be dreaming of Duino and Rilke, yes, I can clearly see that. However, one can’t even contemplate Greek sculpture in isolation from the Mediterranean, the sea that flows in our common European veins. Lonely, for no-one here understands me: Americans have given up art a long time ago, the younger generation envies me for standing chance of getting the Nobel prize, liberals plot against me to prevent me from getting the Nobel, the conservatives might to give me the Nobel but they have no bell.

There’s a mirror in the room – I’ve fallen in love with this room, with this stele. I taste salt on my lip, salt of the Mediterannean. Although it could have been leftover from the ravioli at the Museum cafeteria. No comparison with the ravioli in Amalfi.

And that’s what it’s been like all the time. As far as I’m concerned, I’m just on vacation and don’t send any postcards.

From the editors: A challenge for our readers: please guess which Polish writers the writer imitates in his postcards.