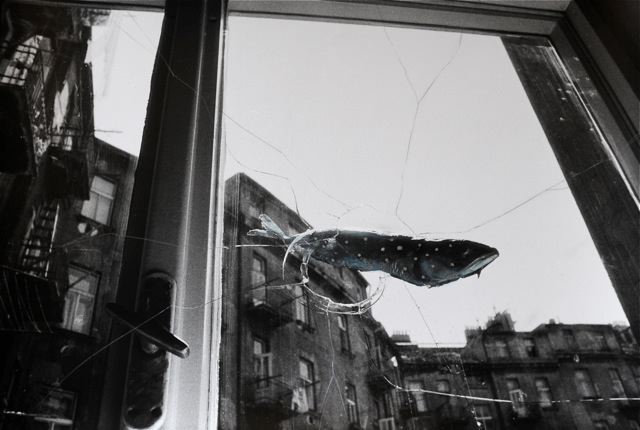 It’s weird being a grown-up. I should have got used to it by now but it still feels a bit weird. It’s not just that one has to work and earn money and meet deadlines. Being the co-owner a piece of real estate is also quite a strange business. You’ve got to pay land tax, a piece of paper demanded, visibly unhappy with us being in arrears, suddenly and resolutely demanding payment after two years. Or take a committee. A piece of real estate has to be managed. In the past there used to be special companies that did that but lately our tenement house has had to manage itself, meaning the tenants have had to set up a committee. At a meeting. Actually, a tenants’ meeting is a topic for a separate feuilleton, a bloody, painful one, perhaps to be published in instalments, full of unexpected plot twists, desperate duels and tirades unprecedented since the days of Cicero.

My tenement house is basically inhabited by old people and gays. The rest are members of various minorities. So the two majority groups took charge of the committee (respecting the rights of the minority, naturally) and once they took control decided to refurbish the house. And there, dear reader, is the rub. It concerns skilled workers. Don’t think you can start renovating just like that. That you can put on a bit plaster here, do a bit of redecorating there, have someone make an entrance door. Far from it. Never mind that you’ve collected the requisite money, that a bank has agreed to give you credit, that you’re ready to sign and implement contracts. You may be a legally elected committee, a resolution with three signatures, a signed contract – nothing doing. For the spectre of the People’s Republic of Poland continues to haunt the capital city of Warsaw, in the form of builders.

So we adopted a resolution and started looking for a carpenter who would fashion a decent wooden entrance door for us, to replace the post-war horror consisting of metal bars that our neighbour, a defence lawyer by profession, says reminds her of one thing only: the gate of the Białołęka detention centre. And since we didn’t want to waste public funds, we decided to get three different quotes. How naïve we were! After several weeks of browsing through ads on the Internet, we identified three potential candidates, like in the good old days of Blind Date. Candidate No. 1 had been praised for brilliant work he’d carried out on historic buildings; candidate No. 2 had excellent references from a friend of ours; and candidate No. 3, although based far from Warsaw on the Polish coast, had an impressive website. No. 1 failed to come up with a proposal in spite of three reminders; No. 2 stopped answering the phone. No. 3 came, took measurements, sent proposals, negotiated, sent several draft contracts, and judging by our enquiries, seemed to charge affordable fees. There was nothing further to discuss: we signed the contract and paid the deposit. And now we’re involved in a court case to get the deposit back because candidate No. 3 has run amok, stopped responding to e-mails and answering the phone, and sunk like a stone in water (somewhere off the Polish coast).

But forget about the tenement! We had the need of something that didn’t involve any resolutions and committees: a wardrobe for our flat, tailor-made, as our flat has high ceilings, something your standard Built-in-Wardrobes Inc. won’t produce and can’t produce, and that’s when we heard of Mr. K. We found out about him by word of mouth, the way the reputation of a superb cardiac surgeon or a lawyer spreads, with the proviso that he has his minuses, sometimes he doesn’t meet his deadline, but oh the quality of his workmanship! The standard is beyond reproach!

And that was the beginning of our saga with Mr. K., whom we fortunately made to sign a contract with a minimum fine for each day’s delay; he was supposed to produce the wardrobe in two months and install it in two days. However, Mr. K turned out to be a latter-day Job, something we didn’t suspect when the contract was signed. It started with terrible back pain, which made it impossible for him to work. Then came the breakdown of his car, as indispensable as his chisel. Then his mother was taken to hospital. In mid-December her state deteriorated rapidly. We expressed our commiserations, knowing only too well that Mr. K had buried his mother three times already: in connection with Mrs. X’s table, Mr. and Mrs. Y’s wardrobe and Mr. Z’s kitchen.

In March it was that bad back again and in April – since he no longer had a mother – his mother-in-law fell ill. He finally started working in June and the installation took him ten days (which is not surprising since he would work for two hours one day, four hours the next, without breaking too much sweat); at the end of the third day Mr. K demanded payment for the completed part of the job and was astonished to learn he had already received half of the fee in advance and that the contractually agreed fine for delays had eaten up two-thirds of the remaining fee. All light went out of him. He continued working but only half-heartedly. He suffered. He complained that were just “sitting around at our desks” and “wanted to exploit him”.

We were flabbergasted. After all, dear Mr. K from another planet, we too have deadlines – for research projects, translations, feuilletons, or texts for catalogues. We, too, take on commissions and sign contracts. Except that if anyone in our profession were to approach work in such a flippant way, after six months they’d be reduced to eating plaster (being no longer able to afford window putty) and they’d be finished professionally.

For, you see, all these layabouts, lousy intellectuals and scribblers that we know, toil ten hours a day, take on extra work and forego various silly intellectual pleasures just to meet deadlines. And they grit their teeth when gentlemen builders spend the tenth day running assembling one thing or another at a leisurely pace, because meanwhile our home – i.e. our workplace – is dug up and invaded by people applying very different standards of hygiene, using different vocabulary and subscribing to a different work ethic. Except that after all those hours wasted by builders we pull up our sleeves and go back to work. For we cannot afford the fancy standards customary in these gentlemen’s line of business.

This essay appeared in the original Polish in the weekly Polityka.