A Place to Stand On 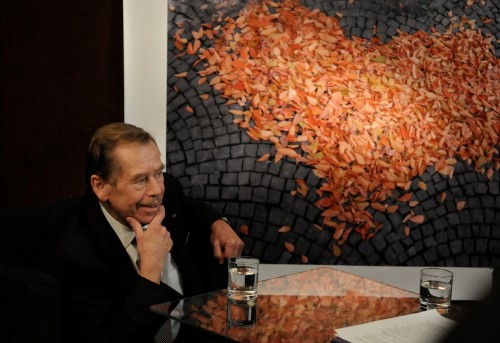 Give me a place to stand on and I will move the Earth, Archimedes said. Václav Havel applied this belief in the physical essence of the world to the very essence of human existence and tested its strength on his own person. He himself had become the place to stand on in our human universe and ended up moving history.

The huge global response to his death shows that the outside world has been more profoundly and fully aware of the strength of Havel’s personality than many Czechs. For there are few people in the entire history of our civilization who have managed to defeat – by mere word, and armed only with the force of their thought and enormous integrity – a seemingly indefatigable power armed with a vast machinery for keeping people in fear.

I suddenly feel abandoned and depressed and I suspect that millions of people around the world feel the same. Even when weakened by illness, Václav Havel’s mere existence radiated a strength that seemed to assure us that evil could be overcome.

In spite of his shyness he was aware of the role he had been assigned, without really trying, sometimes regarding it as a gift that placed certain obligations on him, sometimes as a burden that he nevertheless never hesitated to carry, not for a moment, and right up until the last minute. Over the past few months, however, I felt he had begun to get ready to depart this world. At his last birthday celebration I asked him what he’d been thinking about lately. He replied, with his usual reticence, that he’d been wondering if the world had any meaning. But I think its very existence provides a certain proof of its meaning, he said. I hope for the sake of all of us who now mourn him that he wasn’t wrong and that he now has definite proof. For he was the one who, by his entire life, gave our world meaning.