Confessions of a Mamone 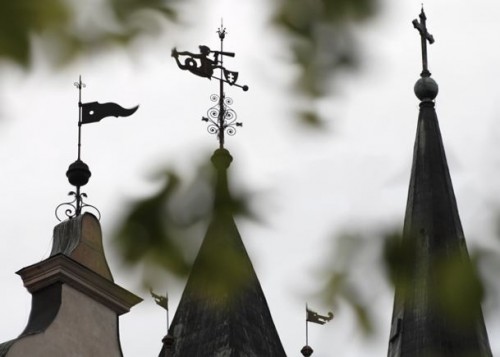 Given that ever since the Renaissance Europe has been so definitively split into Catholicism and Protestantism and so entrenched in its habits, I wasn’t in the least surprised to learn from a Swiss acquaintance that coffee was more Protestant while tea was more Catholic. In response, I ostentatiously sipped from my cup, proud of the fact that it happened to contain coffee. And even though no one on either side of the barricade really believes in God that much, the dichotomies of habit remain, allowing us to speculate endlessly and to keep dividing the world in two halves.

Thus the bathtub, with its enticement to idleness, is Catholic while a quick shower at six a.m., a mark of more ascetic habits, is Protestant. Provided, of course, it’s a cold shower and you dry yourself with a rough towel. White bread is Catholic while dark, wholegrain bread is Protestant. Simple Scandinavian decorations versus ornamental Italian style. Left-wing Protestantism; right-wing Catholicism. The austere North and the indolent South. And Poland, that unfortunate country, forever halfway between the two. Neither Western not Eastern, located too far south of Scandinavia and too far north of Spanish idleness and the siesta of Italian cities. Admittedly, we’ve been increasingly eating dark bread; everyone trying to lose weight will know exactly what I mean. And since these days all things fashionable come from Scandinavia, Poland has, without moving an inch, quite imperceptibly, partly under the influence of the deluge of Scandinavian crime stories we read, been drifting northwards. And that’s a good thing.

And since eating sweets – doughnuts in particular – is just incredibly Catholic, I allow myself this treat just once a year, contending with dark bread in my everyday life. Riding a bike – of course – is pure Holland, Protestantism. As is jogging. The lift is Catholic, climbing stairs is Pro. Szymon Hołownia has recently declared that the era of persecuting Catholics was dawning on Poland. I wish! The great thing about Catholics is that they adore persecution, persecution being more Catholic than ice cream with whipped cream and chocolate sauce! How tired they must be of constantly being in the mainstream, with an absolute majority, of Catholicism being identified with Polishness.

Luckily there are people such as [M.P. Janusz] Palikot who’s decided to have the cross removed from above a certain door [in the Sejm] so now, at last, Catholics can feel as oppressed as the early Christians. Only joking, of course. If anyone is oppressed it’s us, poor atheists. We’re being baptized without being asked, confirmed without being asked, and buried on consecrated ground, also without being asked, our graves decorated with a cross. The priest visits us with Chrismas carols just like everyone else, and we have to hide from him in our darkened homes (as in the catacombs). But the first signs of rebellion are emerging: Palikot’s success, Nergal’s “satanic campaign” [in 2010 Nergal, a rock metal musician, stood trial for ripping up a Bible on stage, Ed.], dark bread served in elite circles.

A stereotypical Protestant gets up at dawn, roused from his just sleep by an Ikea alarm clock. He takes a quick cold shower (you’ve got to harden yourself!) and immediately proceeds to open the curtains. Windows have to be uncovered! We honest citizens have nothing to hide. Let those Catholics watch us work from dawn instead of sleeping until God knows when. Then some breakfast consisting of muesli and dark bread. And back to work. And to produce more. Then some coffee, for an extra boost and focus. Unlike stimulants of a more relaxing nature (typical of Asia), Protestant Europe likes stimulants that help us get up on our feet, get a high, give us a kick, i.e. stimulants vital for working people who do overtime and have to recharge their batteries.

We drink a tsunami of coffee. We smoke cigarettes. Stimulants not conducive to work and concentration do not enjoy our support. We don’t want to relax or wind down, we just want to get high and work. In the evenings we return to our modern flats and, exhausted, collapse onto our Ikea sofas, the sea of coffee we’d ingested fizzing in our temples. It’s hard to go to sleep, it’s hard to relax. We might draw the curtains, provided we have any, and then the alarm has to be set for the next day: five a.m.

I’m not a Protestant. The question – why work so much? – immediately comes to my lips. Why keep working so much, why produce more and more of everything, since that will only force us to work even more to be able to keep it all?

Whatever my relationship to God might be, when it comes to habits I’m an absolute Catholic. I sleep late. I drink coffee in bed. I love soaking (and relaxing) in the bathtub. I’m lazy. I have a sweet tooth and if it weren’t for weight considerations, I would scoff enormous quantities of sweets. My habits aren’t in any way austere or northern. I’d prefer to lounge about eating Kinder Surprise eggs and reading.

In Protestant families children are thrown out early on to make their own way and can’t count on getting much support afterwards. Let them get toughened up. But I’m a mummy’s boy and wouldn’t mind living with my parents for the rest of my life. In Italy this kind of person is called mamone (in Scandinavia, due to the absence of the item concerned, they don’t have a term for it). A mamone spends all day promenading around town showing off his new outfits; since he lives with his mother he can spend all his money on gear. He’s not much use to his mother though: he won’t take the rubbish out and won’t contribute to the household. Fellini, who was both an extoller and a critic of Italian Catholicism once made a film, I Vitelloni, about these very people.