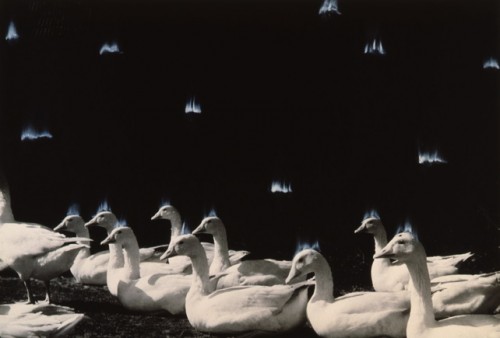 Be careful what you wish for, you just might get it, goes the American saying. The American warning doesn’t apply to me though, as for many years my greatest wish was for the European Union to stay together, a wish that is beginning to look less and less realistic. What seems to be coming true these days instead is my concern that the EU might fall apart.

Mentally I have been preparing myself for a disintegration for a long time although until recently the actual picture had been quite hazy. But lately international press and academic networks have been teeming with descriptions of what such a disintegration might entail. They make interesting reading. The texts focus on the first days following Greece’s default, which they believe cannot be prevented and which, in turn, will result in the disintegration of the eurozone which will bring about the inevitable disintegration of the European Union. However, not even the boldest analyses dare to envisage in detail anything beyond the first few days. It’s like chess – if your first move is wrong you can predict a few more inevitable mistakes but the final position at the time of your inevitable checkmate can take a thousand different forms. Not that it really matters.

The first moves are likely to look as follows: one day, discovering it has run out of money, the Greek government will close the banks and its borders to stop the remaining euros flowing into Germany. And since this move is in contravention of European laws, it will create an illegal situation and this, along with the inevitable rush of account holders and investors on European (for example: French) banks will bring about chaos and the bankruptcy of numerous foreign firms that do business in Greece, and so, despite all efforts to create a defensive wall, the contagion will continue to spread, initially to Spain and Italy. The European Central Bank will have to pump in unlimited funds, provoking panic in the financial markets. Individual states will defend themselves by cutting off the flow of capital which, in turn, will cause uncontrollable spasms in the economy as well as in politics.  There are several scenarios, including the possibility of Germany leaving the eurozone, but the ultimate impact on Europe is the same.

The only analysis that has so far dared to calculate the losses following the disintigration of the eurozone is that by the Swiss bank UBS, which also says that saving the euro will be roughly ten times less costly. Citing this report, Slovak Finance Minister Ivan Mikloš further claims that in the first year following the disintegration of the eurozone alone Germany’s GDP will drop by 25 per cent while smaller countries can expect a drop of 40 to 45 per cent. This kind of contraction has not been known to occur since the Great Depression – and that was followed by a war.

Mentioning the war is tricky, as Polish Finance Minister Jacek Rostowski painfully discovered recently after saying that there would be a war in Europe within ten years of the disintegration of the Euro. He was immediately accused of scaremongering. The Financial Times analysis of a potential crash of the euro recalls the Franco-Prussian war of 1870-1871, which caused tensions within the Latin Monetary Union (formed in 1865 by France, Belgium, Switzerland and Italy). In 1914 this union was buried by World War I, which also put an end to the first great wave of globalization. Right up to the outbreak of war all Western economists and analysts unanimously claimed such an outcome was impossible since global capitalism and the financial markets would not allow it to happen.

Curiously enough, every analysis of the crash of the euro points to the strange phenomenon of the self-fulfilling prophecy, the notorious spiral of fear which financial markets cannot control, as the main driving force of disintegration, apart from the inability of European politicians to agree on how to save the common currency. Europe, a continent that has built its global success on the Enlightenment-era worship of reason, will break asunder because it can’t control its emotions. And deservedly so, I hear the Chinese say.

In these uncertain times, when a system whose institutional might under normal circumstances keeps all kinds of fantasists down to earth starts to shake in its foundations, the fantasists and gamblers start raising their heads. I remember them from November 1989, soon after the collapse of the Communist regime. They suddenly came pouring out of the woodwork, with a mad look in their eyes, heaps of energy and crazy ideas about how to change the world. Within a few months many of them had been swept into oblivion but a few, including Vladimír Mečiar, proved to have more staying power. His enormous advantage was to be the kind of gambler who doesn’t care what happens tomorrow because he can imagine neither that he might fail nor the consequences of what would happen if he succeeds. That is why he managed – in conjunction with another fanatical gambler, Václav Klaus – to split Czechoslovakia in two.

This is not the time to go into whether the division of Czechoslovakia was a success or a failure for the Czechs and the Slovaks – that, at all events, will become clear in the first geopolitical exam we will be asked to take if the EU falls apart. In any case, our experience from twenty years ago ought to put us at a psychological advantage: we already know that states and institutions can collapse within a few months, regardless of the will of the people, simply because gamblers ruled by emotions have launched processes that can no longer be halted. And Europe has now found itself on the threshold of precisely such a process.

Present-day Europe has plenty of gamblers and revolutionaries waiting for an opportunity and for the system to collapse, although they are not yet in power. We certainly have one in Slovakia. Strangely enough, for years it was Robert Fico who has been regarded as Mečiar’s successor. In my view, this is a mistake committed by an entire generation, who needed Mečiar or his successor as a mirror in which it could better see its own reflection. Certainly, Fico is a dangerous politician who considers freedom a necessary evil rather than the cornerstone of human dignity, but he bears no resemblance at all to Mečiar. In a certain sense he is a traditional politician whose geopolitical orientation and understanding of politics is almost undistinguishable from [chairman of the ruling SDKU] Dzurinda and Mikloš, whom he regards as his arch enemies.

But in fact Mečiar’s true heir is  Richard Sulík [Speaker of the Slovak parliament and leader of SaS party, junior partner in the ruling coalition]. Although, fortunately for us, he is a man who lacks Mečiar’s skills and energy, he is worth keeping an eye on because he may be followed by others, more talented than him. He shares one of Mečiar’s key qualities – he is a political gambler and a revolutionary. In order to thrive he needs chaos and that is why he generates it. And that is why Sulík doesn’t need the European Union, which only clips his wings. Just as Czechoslovakia used to clip Mečiar’s wings.

It is no coincidence that Sulík is a right-winger. It is the radical Right that has been raising its banner in the West, threatening to destroy the traditional system it considers rotten and socialist – from the Tea Party in the US to Marine Le Pen in France or the True Finns.  Ironically, these days it is the Left with its revolutionary past that tends to represent the moderate middle and politicians such as Spain’s Zapatero or Greece’s Papandreou have been, against their deepest convinctions, cutting budgets left right and centre, just to keep their countries in the eurozone.

However, it isn’t because of Sulík that I am concerned about Europe. What causes me concern is the language used by prominent opponents of the European Union, many of whom claim to be opposed only to the Greek bailout while actually wanting to save Europe. It is a language based on seemingly moral principles such as the unethical nature of debt and the injustice inherent in the poor having to pay for the rich. There is further irony in the fact that this argument is used mainly by the Right, which seems to have forgotten that it was their own invention of credit that launched the European industrial revolution and gave birth to capitalism, and that it’s the same Right talking that had, until recently, glorified financial deregulation whose toxic derivatives were inflating a credit bubble of global dimensions.

The ethical terms bandied about by the opponents of the Greek bailout are in fact a means of provoking hatred among nations, an accusatory language whose semantics are profoundly negative. Its negative energy is winning a resounding victory over the clumsy defence mounted by positivists whose only response is the warning that moral radicalism is the road to hell.

How well I remember this language: twenty years ago it was used by Czech and Slovak nationalists alike and it was its negative energy that led to the inevitable split. Then, too, it used seemingly ethical terms – Czech nationalists working out how much extra the Slovaks are costing them and the Slovaks claiming the Czechs were intentionally ruining Slovak economy. We ought not to be deceived by the seeming fact that the disintegration of Czechoslovakia has, in fact, benefited both countries – a very different picture may yet emerge from historical perspective. The sense of being liberated from the Slovaks has bred among the Czechs an arrogant insular mentality that makes them feel they can mock the rest of Europe. Slovakia, on the other hand, has compensated for its perceived fate of being eternally on the periphery by defying Brussels. Iveta Radičová was the first to proudly raise this banner, yet one year after taking power she resembles a battered wife rather than a prime minister. If the row over the European bailout fund drives her out of office, it will in some way be a just punishment for her naivité.

However, what’s crucial is that more and more Europeans today speak the same dynamic language full of negative energy which twenty years ago brought about the disintegration of my country. And this is what gives me greatest cause for concern.

On the other hand, my domestic experience might not apply to Europe as a whole. For with every fresh analysis of what will happen after a Greek default the language of the those who defend the euro and the European Union, hesitant until now, is beginning to change and even those traditionally reserved about the euro and the EU are now joining their ranks. Something must be afoot if even the editorial in last week’s Economist regretfully admitted that all the truths of the long-standing critics of the euro have become irrelevant because allowing the euro to fail is much, much worse. Perhaps the defenders of the EU will now find words that carry enough conviction at least to match the negative semantics of their opponents. I do wish this to happen, regardless of what the Americans might say of such wishes.