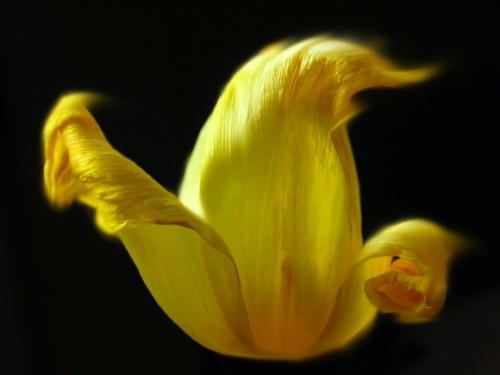 Arriving in Licheń, on a summer’s day. Approaching from behind I caught my first glimpse of it against the background of the lake: first the azure of the water, then the green of the reeds and the forest and finally all that golden glimmer materializing from the soil like a mirage. Yes, like a golden cloud. A gift from outer space. I drove to a crossroads and then slowly made my way through a bazaar of Blessed Virgins, Jesuses and Popiełuszkos. Turned out in plastic, on rugs, as three-dimensional spectres, on sheet metal. The stalls selling commodities were like Tatar tents. The whole bazaar seemed to have come from the steppe, you could hear the fluttering of its wind-battered sanctity. I parked the car in a peasant’s field. The owner came, took my money and started telling me something saintly and gossipy at the same time but I had already spotted the golden cliff further along and could not concentrate. I had to go there straight away.

Jesus, it was huge. Huge and beautiful like some harlot of Babylon. It didn’t give you a chance. All you could do was get on your knees and submit to it. Lie down at its feet in a kind of idolatrous vision. I came with the intent to ridicule it but the desire soon left me. I wondered around it for an hour, two or three, eventually losing count. I tiptoed timidly among the people who made this. With a slight sense of betrayal I observed old women who were admiring the most beautiful thing they had ever seen. With scarves on their heads and plain loafers without heels, almost like men’s shoes, they strolled around, supported by their children or grandchildren. Entire families promenading and picnicking in the shadow of the colossus they had raised to the sky.

How many years had I been wandering, searching for the mysterious soul of this country, finding only the stench of corpses of the past and eternal imports and endless aping of the world’s ideas and fashions. And meanwhile the Sagrada Familia of the East, the Taj Mahal of my motherland had arisen right here, twenty kilometres from Konin. As if rising from an undulating field of wheat, the origin of all forms. As a rock, a mountain side, as a hollow wall it stood a short distance away, willing you to get used to the idea that it was something created by human hands. That it was something sprung out of village parish priest’s dream. There he was, all in metal, kneeling in the courtyard in front of an equally metallic pope, presenting him with a model of his creation. Handing it over as if to God himself. Actually, there was no as if. In these parts the Pope was God and that was it. Everyone was on their knees praying to him. For them he must have been something like Jesus Christ or the Holy Spirit. The Holy Father had sent him down to the Poles for their pleasure. So that they have something to be proud of. For they have deserved it, after all those years of oppression and humiliation. After suffering all those Tatars, Russians and Germans.  After being betrayed by the world, which left them to their fate. So they received the gift of someone Son of God-like, except that he was a real Pole. Without any outside ingredients. And together with Mary, the Queen of Poland, he has taken the country under his protection, just like the Lord had once taken the people of Israel under his wing.

This is the story Licheń tells me every time I come near. Overall, it was like being in heaven. Like being inside the most beautiful, the most holy icon. There was a golden glow everywhere. Everyone was taking pictures. A little piece of ground near Konin has been deified. People were strolling around the garden of paradise. It was a Polish heaven, shining with the supernatural glow of the golden wheatfields and a glimmer of eternal innocence. I imagined all this had broken away from the rest of the world, from all the incomprehensible universal religions, from all those alien general histories, and begun to glide on the waters of the universe. Our very own ark that would stay afloat forever. I walked from deck to deck, staring at the bright wake in the water. It was leaving behind all the irksome nations, languages, countries, continents, all this mess of history that had always turned against us, choosing us as its victims only to cheat us or – even worse – to forget about us altogether.

There was no other way we could survive: only by sailing away on our own metaphonic ship, on a red and white boat with our Queen and her Polish favourite. And so I followed, from deck to deck, carrying a camera like everyone else, into the depth of the loading deck, into the ballast chambers filled with soil, stones, bones and congealed blood, which were supposed to stop the vessel from keeling over, from tilting. Poland. Licheń. Summer. Everything adorned with eagles that had landed here, there and everywhere – atop columns, on the mouldings. Eagles and all that wheat.

A nation of serfs toiling their masters’ soil and searching for winged symbols of freedom in the sky. An eternal dilemma. These peasant faces, these hands, these worn-out feet in Chinese silver-plated slippers, the tin costume jewellery on bodies accustomed to lifting heavy burdens, this relentless, purposeful animal gait, everyone heading for the golden gorge, the innards of the Leviathan. Into the depths of a virtual tribal eternity, into the belly of the fish that would carry us further into history.

I was taking one picture after another, watching my people, blood of my blood, bone of my bone, watching them come on board. Women like my grannies, men like my grandpas – none of whom had lost their lives in an uprising – entering the cool loading areas of Licheń, lifting their eyes and feeling dizzy, for they had never been inside anything as tall and full of light. But underneath there are bones and stones. All over the gardens outside, there are piles erected in honour of Siberia, in honour of Hitleria, in honour of Communism that helped our nation construct its identity. For what would we be without Siberia, Hitleria, Communism? Nothing. Just another nation among a hundred banal nations with a history yawning with boredom.

What else could we worship, what else could we erect a sanctuary to? Improvements in hygiene? Knowledge of foreign languages? The rights of animals and minorities? How pathetic, how banal. Siberia, Hitleria, Commmunism, like three idols smeared with stale blood in the garden of Eden. Our greatness, our exceptionalism, our immortality. They have guided us out of nothingness. And now people are strolling around taking their pictures. They eat sandwiches in their shade. Timidly, they light cigarettes. The smell of meatloaf wafts from the canteen, mixing with the smoke from the crematoria. Poland. Summer. The harvest is about to begin. Kolbe, made of blue plaster, lies behind iron bars. He has a girdle around his loins like Christ on the cross. Above him looms an SS officer made of some kind of black gutta-percha. Dreaming of an innocent, oppressed sanctity. Dreaming of a lighthouse of a deity incarnate. Dreaming that, in spite of everything, we were the chosen. That the Lord has finally understood his mistake, abandoned Israel and adopted us instead.

Here in the hot midday sun stands our ark of Licheń, the golden edifice of Licheń, the Licheń tower of bones, the Tower of Babel, our Polish tower reaching to the sky so that we never ever have to ask anyone except ourselves for anything, until the end of days. So that we can come here and light fires above our bones in the ground, above the coagulum of our blood, above ourselves. Amen.

Yes, in this garden of Eden I see incarnations of my grandmas and grandpas; generation after generation entering these churches covered in gold, blue and scarlet to find relief from their black day-to-day toil, from the abyss of their lives. I am quite sure the whole nation could fit into this place, and slam the door shut. My feet were sore from all the walking, on flat ground, and up and down stairs. One could easily get lost here. Not so much inside as on all these viewing platforms, amidst the glimmer, the faeries, reflections and phantoms filling the air. I’d rather stand on the threshold of the House of the Lord than dwell in a godless place. The words are engraved in gold in black marble. So this is what the threshold is meant to look like. What would godless places look like by comparison? I tried to imagine. And I felt just like I did in 1965 in the church in Szembek Square in Warsaw. I did not understand anything. I was standing in the middle of the nave, feeling tiny. Everything was bigger.

I stood there wondering what the Blessed Virgin was wearing underneath her white and blue dress. That’s what helped me get through the long hours. Everyone must have been wondering about the same thing. Especially the priests. Surely this was the only way. How could they have managed, surrounded by all these female images, by the matriarchal deities, if they never wondered what lay underneath? Yes. The Blessed Virgin Mary was all we needed. She was the embodiment of my country and my country was an embodiment of her.  All this pretend monotheism was just window dressing. Actually, all we ever needed was her, along with the saints and the beatified ones. We have never needed God, just dozens, hundreds of saints floating in the air like ghosts, plus their goddess. Bones beneath the ground, ghosts in the air. The Queen of Poland. A Jewess.